This article explains how our team has implemented a micro frontend architecture using Webpack Module Federation. If you're interested in understanding why we decided to use a micro frontend approach read THIS post written by my teammates.

In short, Module Federations lets you combine separate builds to form a single application. This lets you develop and deploy modules independently and combine them at runtime. Since modules combine to a single application you can share bundles for third party libraries, events propagate nicely and all parts of the applications have equal references to global browser objects.

If you want to learn more about the details of Module Federation i recommend starting with this article. Webpack 5 Federation: A game changer in JavaScript architecture 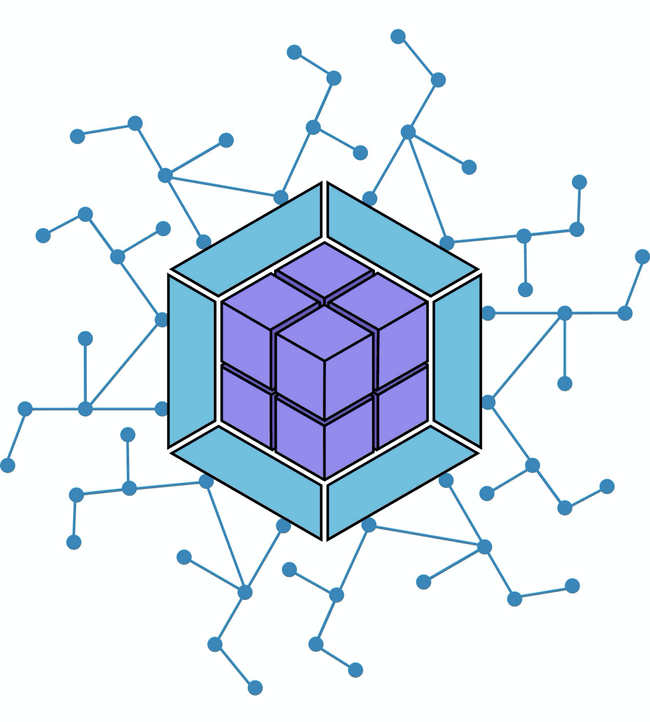 Let's get the terminology right

The currently running application that is hosting federated remote modules.

A reference to an external federated module.

A module that is exported from an application is “exposed".

The smallest unit of shareable code. Can be a single file.

A webpack build that is both a host consuming remotes and a remote being consumed by other hosts.

To put things in context: we work in the tele- and datacom industry, providing a large number of subscription based services to our users. Our digital platform is facing enterprise customers, enabling them to fully manage their business and services.

Our mission was to merge two large monolithic React applications, two product development teams and two large customer segments to create a simpler solution for the end users and the developers on our team.

After deciding that we indeed wanted to implement our new platform using micro frontends, we started looking into ways of doing so.

Keep in mind that our goal was to achieve:

Fast forward. We decided to try out the new feature of Webpack 5, Module Federation.

This was in June 2020, and at the time Webpack 5 was still in beta. We've encountered our fair share of undocumented, un-stackoverflowed errors. With time Webpack 5 became stable and was released, and so was our system of micro frontends.

Our system consists of a main federated module, and all other micro frontends in a mono repo.

The main federated module has the responsibility of setting the global layout of the user interface, such as the global navigation menu and top bar. It also renders appropriate micro frontends on the appropriate route. From there each micro frontend handles its routing internally. 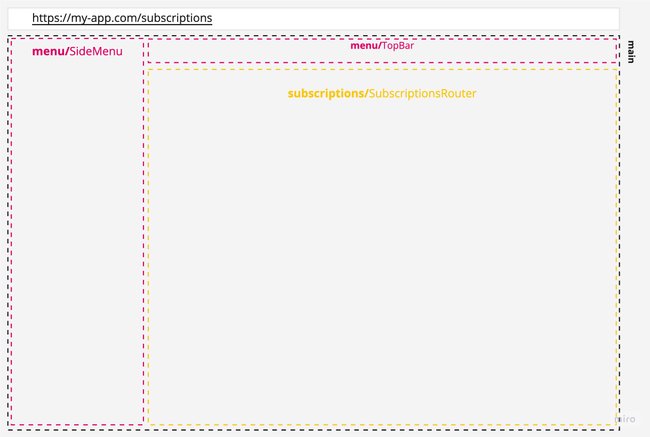 main renders modules from the remote menu and a module from the appropriate micro frontend, in this illustration subscriptions

We've also used the main federated module as a shared library for all of our applications. Eg. to share layout components or formatting utilities. This is a part of our architecture which we're not completely sure scales well. We're considering separating the responsibilities of main into an app shell for stitching things together and a shared library.

main also authenticates the user, sets up an apollo client for data fetching and provides the global state to the entire system. Such as presentational language and router. 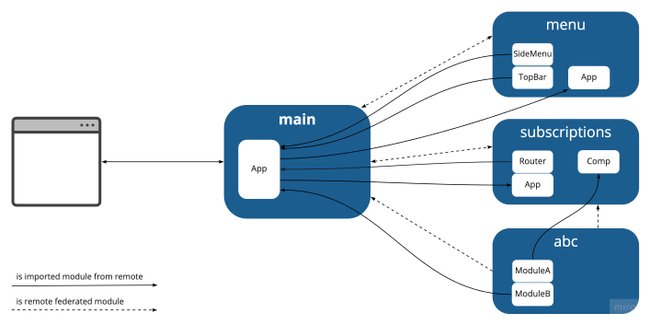 Notice that micro frontend "abc" does not import App from main, or have main as a remote. This is done to underline the fact that you can have a standalone app in this system consisting of many bi-directional host/remotes apps. This standalone federated module could for example be an isolated part of your system that should be rendered on some path on the same domain, but doesn't care about the rest. Or it could be a shared library of utilities and UI components. This is a solution we are considering for our shared library.

Bear with me here, and let's look at it in code.

Simplified, the main federated module root component can look like this. This is the root of our system

The subscriptions app root component can look like this. It import the system root from main. This will be rendered only if subscriptions is the host of our system. For example when you run subscriptions locally.

And the Module Federation config looks like this. Note that we expose SubscriptionsRouter.tsx not App.tsx

Once the main federated module is loaded on the client, entry files for other micro frontends are loaded dynamically in main. These are also loaded using relative paths. Our builds are stored in AWS S3 with the same relative locations as in the repository. (More on this in an upcoming article about our independent deployments)

This enables any app to be the host for our system, and regardless of which app is the host the rendered UI will be the same. In practice this means that you can run any single app, but get the context of the whole system (remotes are fetched from our staging environment). It is experienced as working with the entire system, as if it were a monolithic frontend, but you only run a small chunk of the code — the code you are actually working on.

By using relative paths it is quite simple to set up a proxy for fetching micro frontends from our staging environment or from your localhost.

Our architecture is in fact also configured to support running multiple micro frontends locally. So you can decide which apps you want to fetch from your local dev server and which to fetch from stage. This can be useful when you want to modify a component which is exposed and used as a remote module by another application. Again, you only have to run the code you're working on and can disregard the rest.

This bidirectional dependency between main and a micro frontend is not a requirement. Rather it's a pattern we use for our micro frontends that require authentication, data fetching or global state. If we were to implement a shared library with module federation for our micro frontends, it would consist of stand alone components and have a one directional relationship with any app the wants to utilize its content. This integrates seamlessly with the rest of the system.

You might find that our implementation does not follow the traditional concept micro frontends. This was a conscious decision on our part, and we're currently satisfied with the architecture and how it supports our goals. However, we iterate whenever we se fit. Please reach out if you have any thoughts on the topic or want to start a discussion on it! 💡